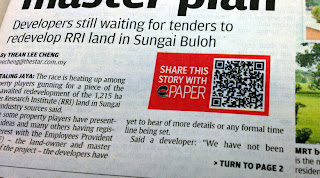 A recent study by comScore revealed some very interesting data regarding QR code usage amongst consumers. It found that 38 percent of respondents had scanned QR codes placed on product packaging, but that the best performing QR codes in advertising were placed in newspapers or magazines. Half of smartphone users who had scanned the QR codes advertising promotions had done so from these types of print media.

These types of scannable codes have been part of mobile marketing for several years now. Smartphone users can simply point their phones at a code to scan it in the same manner as a cashier in a store scans a barcode to record the price of an item at the checkout.

Only 10 percent of smartphone users used their devices to scan business cards or brochures, according to the survey results. Approximately one-third of respondents reported that they scanned a flyer, poster, or a website using their smartphone.

I can understand why newspapers and magazines would be the most popular media for QR code marketing use among consumers. A person who is reading a newspaper or a magazine is more likely to take his or her time to read through the material in detail. Web surfers, in contrast, tend to skim through what they are looking at. Another reason why print media works better with QR codes in advertising is that this material can include instructions about what these square codes are and how to use them effectively.
Posted by 3Seventy at 9:00 AM